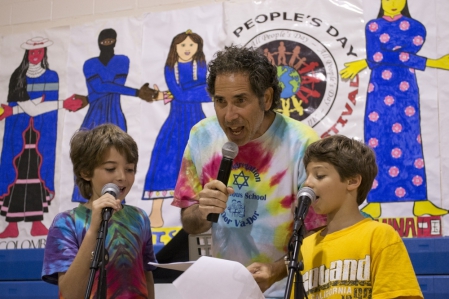 Name:  Rabbi Barry Silver
Hometown:  Boca Raton, Florida since 1979
Raised in Stamford, Connecticut
Hobbies:  Tennis, ping pong, frisbee, trampoline, basketball, chess, social activism, suing the government
Music:  Writing parodies and original music, rock and roll, ballads, Jewish, Latin, French, Yiddish music
Movies and TV:   Star Trek, Cosmos, Casablanca, Journey of the Universe, Shrek, Bill Mahr, John Stewart
Favorite Authors: Carl Sagan, Albert Einstein, Abraham Joshua Heschel, Elie Wiesel, Richard Dawkins and the rest of the 4 horsemen of atheism.
Languages:  English, Spanish, French, Hebrew, and a love of Yiddish
My motto:  Cherish each day, Be a blessing, Experience the miracle of life
My name is Barry Silver and I am a post-denominational Rabbi practicing cosmic Judaism, a civil rights/environmental attorney, a former Florida legislator, song writer, and social activist Rabbi-rouser.
I am married to Francine, a wonderful public school teacher and mother and have two activist children athletes, Brandon and Ari
Brandon will be Bar Mitzvah on October 14 at 7:30 and all are welcome to join us in celebrating this simcha
WHO INSPIRES ME
I am inspired by the teachings and wisdom of Albert Einstein who said "Science without religion is lame and religion without science is blind", by Carl Sagan who said that one day religion will be invigorated by the profound sense of awe, wonder and truths produced by science, by Abraham Joshua Heschel who said that religion should produce in us a sense of radical amazement towards everything in the universe and who said he felt as if he was praying with his legs when he marched for civil rights with Martin Luther King, by Anne Frank who said "How wonderful it is that we don't have to wait a single day to change the world", by Thomas Jefferson who said," Fix reason firmly in her seat, and call to her tribunal every fact, every opinion. Question with boldness even the existence of God; because, if there be one, he must more approve of the homage of reason, than that of blindfolded fear, by Theordore Herzl, who dreamed of the founding of the Jewish state of Israel and the resurrection of Hebrew as a spoken language who said, "If you will it, it is no dream" by Ben Gurion who said "A Jew who does not believe in miracles is not a realist," and by my father Rabbi Samuel Silver who said "The greatest of all miracles is that we need not be tomorrow who we are today and can improve if we make use of the potentials implanted in us by God."
WHAT INSPIRES ME
The numinous subtle, awe inspiring creative power in the universe, that some have called God, which is manifest in everything in the cosmos and can be found in abundance in the human being, especially those who are not shackled by religious or political indoctrination, and instead are liberated and empowered by the  religious/Jewish quest for holiness, transcendence, peace, justice and love, a scientist's quest for understanding, wisdom, exploration and knowledge, the American quest for freedom and happiness for all people, and the activist's quest to transform the world into a paradise for all creatures as envisioned by the Jewish prophets, as well as sages of all cultures and creeds.
THOUGHT FOR THE DAY

Translation:  It is perhaps at the darkest hour when the most beautiful light emerges

Experience the Miracle of Life

New Website!
So happy to finally have my site live. Looking forward to sharing my passions with the world.